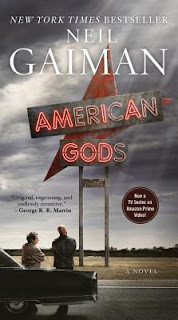 My Series Sunday pick is American Gods by Neil Gaiman. This international bestseller is adapted to a television series starring Ian McShane, Ricky Whittle, Yetide Badaki, Emily Browning, Gillian Anderson, Pablo Schrieber, Orlando Jones and more. Quite the cast! No wonder 94% of viewers like the show.

Mere days before his release from prison, Shadow's wife, Laura, dies in a compromising position in a car crash. Shadow meets an interesting character on the plane ride home. The man introduces himself as Mr. Wednesday and claims to be a former god. He offers Shadow a job—quite convincingly since no one is likely to hire a convicted felon and Shadow has no one to go back home to. Together they embark on a strange yet profound journey all across America while a storm is brewing.

American Gods delves into the soul of America. The good, the evil, the addictions, the greed, the trust. We are all victims of such gods as social media, entertainment, religion and passion. As I read along, I am surprised by how we are sucked in to the various gods and why they are at war.

I don't want spoilers in the TV series or get too far ahead for the Sistah Speak: American Gods Podcast. Also, the paperback edition is thick AF with 750 pages. It is separated into four (4) sections that I will use as guidelines to post reviews. I may very well take months to finish so hop along for the ride!

The battle between Old Gods and New Gods continue. Whose side are you on? I am rolling with Mr. Wednesday and 'nem! Tune in to the Season 2 premiere tonight and every Sunday on Starz channel.