Before We Were Wicked 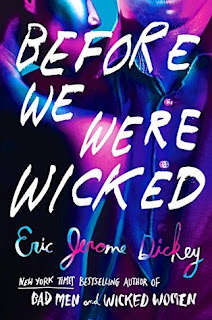 One moment can alter the course of your life. Ken Swift is out hurting people for cash to pay his way through college when he lays eyes on Jimi Lee. He playfully claims to be her boyfriend on the first chance meeting but the intention is a one-night stand. He has college to finish and Jimi Lee is heading for Harvard after a gap year in native land. Neither have time for a committed relationship. But their sexual chemistry is too strong. When Jimi Lee becomes pregnant, their different worlds become forever entwined leading to a cultural clash, passion, infidelity and raw emotion.

This is what a prequel looks like! Before We Were Wicked is a full introduction to Ken Swift. No guesswork; this character is fleshed out well. It begins in the 90s when pagers were a means of communication and internet chat rooms were a thing. It flows right into the first page of Bad Men and Wicked Women which was released exactly one year ago.

Eric Jerome Dickey is known for writing expertly from a woman's point of view. But this prequel is a reminder that the author can write just as well in a male's voice. In fact, it gave me insight into a man's inner thoughts while in a relationship. For that alone, Before We Were Wicked is worth reading.

"People never talked about the stress a man felt when he was trying to keep the ship from sinking, when he felt like he was on the Titanic throwing water out with a teacup, and no one was helping him keep what he had afloat. It felt like for every cup of water I threw away, someone threw in two gallons of piss." ~ 72%

Bookhearts, you have exactly one week to gather your coins. Reserve a weekend to read this star-crossed love lust novel because you will not put it down.

Happy Early Pub Day, Eric Jerome Dickey! Before We Were Wicked will be available Tuesday, April 16. You're welcome for the love and turkey bacon. 😉