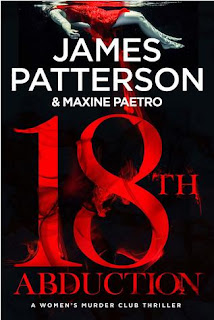 It usually takes the entire Women's Murder Club to solve a mystery but not this time. Reporter Cindy Thomas still takes any surprising revelation she can get on the record. Yuki is only present during customary beer/lunch breaks and one brief chapter. But Claire, as Medical Examiner, plays a key role. Other characters to the forefront in The 18th Abduction are Lindsay's partner Conklin, boss Jacobi and husband Joe. It's just Lindsay and the guys!

Listen. I read this book in one day. Patterson & Paetro used all the writing tools for this new release: suspense, action, realistic crime, multiple settings, reader engagement and trademark short chapters. Good thing I didn't have any plans except to take cold meds, nap, read, eat soup, repeat.
"I wasn't yet convinced that the dots, in fact, connected." ~ pg. 200

Fans of the Women's Murder Club series will be pleased with this new release. It is definitely good enough to hold us until the next book is released later this year. You may not like how the Club takes a backseat to Joe Molinari but it is worth it in the end. I enjoyed every page! It earned a spot on my top series reads of the year already. Yeah, that good!

Side Note: Why are books often available in the UK before the US? For example, The 18th Abduction was released on March 7 there but will not be published until April 29 here. And as evidenced in the US vs. UK bookish meme, the covers are different and sometimes better. I'm just saying...