Series Sunday: The Girl Who Could Move Sh*t With Her Mind 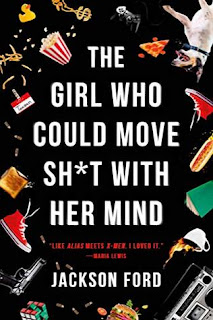 My Series Sunday pick is The Girl Who Could Move Sh*t With Her Mind, presumably the first book in a series by Jackson Ford. (It is not categorized as a new series but the story continues in a book to be released later.)

Why did I choose to review an advance copy of The Girl Who Could Move Sh*t With Her Mind? Well the cover grabbed my attention first. Random objects are flying in space such as a pair of Chucks, a rubik's cube, cup of coffee, movie theater popcorn bucket and a yellow rubber ducky. I read the title next and now I am reeled in. This must be good, right?

The ever so witty Teagan Frost has psychokinetic powers. The government uses her secret skill for odd missions. It's all paid fun and games until a dead body turns up at the last job site. Guess who is suspect #1? Teagan has 24 hours to clear her name and protect her beloved hometown of Los Angeles. S/O to Slauson Ave 💙

The easygoing writing style and language makes the main character so darn likable! Too bad this book is better suited for young adults; the dialogue is simplistic with sprinkles of juvenile cursing and the storyline itself is nothing to mull over. Us grown folk will lose interest real fast and grow bored very quickly. If it were not for the main girl, I would have given up reading far sooner. Yes, I like easy reads in the warmer months but not this basic.

If you are looking for a book to occupy a teenager during the summer school break, this is ideal. And just maybe they will be interested in Random Sh*t Flying Through the Air where the story continues.

Happy Early Pub Day, Jackson Ford. The Girl Who Could Move Sh*t With Her Mind will be available Tuesday, June 18.