Series Sunday: A Prince on Paper 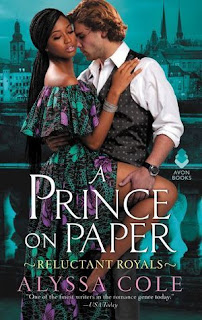 My Series Sunday pick is A Prince on Paper, the third book in the Reluctant Royals series by Alyssa Cole. I don't usually do this but I read out of order. What had happened was I started reading the first eBook of series, A Princess in Theory, when I got the opportunity to read an advance copy of the newest book, A Prince on Paper. So I put the first book on hold and dived into the third. Yes, completely skipping the second book but I was surprisingly not lost.

Nya Jerami is looking for her Prince Charming. So far he only exists in a virtual dating game. But when Nya returns home to Thesolo for a royal wedding, she finds the real-life celebrity prince she loves to hate. Meanwhile, Johan von Braustein is playing games with paparazzzi. He even creates a fake engagement! Readers will root for their fake romance to become a happily-ever-after.

The series jumped left. It is no fault to the author though; the writing is on point. It was the characters and main storyline that barely held my attention. Maybe because I was so into the first book when I put it aside to start this one. For lack of a better word, A Prince on Paper felt silly. I am a series addict but this is not the book for me. Regardless...