Series Sunday: T is for Trespass 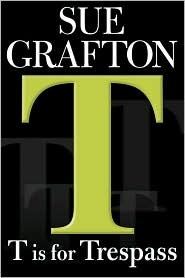 My Series Sunday pick is T is for Trespass, the 20th book in the Kinsey Millhone alphabet series by the now-deceased Sue Grafton. In the first style of its kind in this series, the narrator shifts from the main character, Kinsey Millhone the Private Investigator, to Solana Rojas—a sociopath. Or whatever her real name is because this one was stolen. Readers see firsthand what Solana Rojas is up to but the suspense lies in when, and how, Kinsey finds out.

"I believe, as many people do, that things happen for a reason. I'm not convinced there's a Grand Plan in place, but I do know that impulse and chance play a role in the Universe, as does coincidence. There are no accidents." ~ pg. 199

T is for Trespass just may be the most unsettling novel of the series. It addresses elder abuse, manipulation, private caregiver horrors and identity theft. I must say, Kinsey Millhone handled her own and showed readers a compassionate side to her character.

My 5-heart rating is a big improvement from the last book I read of this series, S is for Silence. Thank goodness the whole series didn't go downhill from there. I am quite impressed that Sue Grafton kept up a strong heroine and storyline for 20+ books. Indeed an accomplishment! My dear mystery bookhearts, if you still have not started this series...join the reading challenge and catch up!