The first line(s) of a book is the reader's first impression. Some are famous. Most are meh. Few are forgotten. Below are the best first lines I've read this year because they caused an immediate reaction, encouraged me to read further and unintentionally share a common theme of TIME. 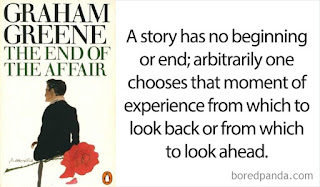 1. "My calendar is full of dead people." ~ The Book of Two Ways by Jodi Picoult
2. "I had my recurring dream last night." ~ Parable of the Sower by Octavia E. Butler
3. "She was mine before she was anyone else's. All mine. Partly mine. Now she belongs to you and them and shirts and rallies and songs and documentaries." ~ One of the Good Ones by Maika & Maritza Moulite
4. "Time runs my life. A constant measuring of what's gone and what's to come." ~ This Is My America by Kim Johnson
5. "What does it mean to want an age-old call for change not to change and yet, also, to feel bullied by the call to change?" ~ Just Us: An American Conversation by Claudia Rankine
6. "I refuse to acknowledge time, famously so." ~ The Meaning of Mariah Carey by Mariah Carey
7. "I learned everything I know about love, life, and getting ahead in one of the last places most people would ever want to live: the infamous Brewster-Douglass Housing Projects, on Detroit's down and dirty east side." ~ I Tried to Change So You Don't Have To by Loni Love
8. "All through the night my mother sat near me but never touched me." ~ Zikora by Chimamanda Ngozi Adichie
9. "Deacon Cuffy Lambkin of Five Ends Baptist Church became a walking dead man on a cloudy September afternoon in 1969. That's the day the old deacon, known as Sportcoat to his friends, marched out to the plaza of the Causeway Housing Projects in South Brooklyn, stuck an ancient .38 Colt in the face of a nineteen-year-old drug dealer named Deems Clemens, and pulled the trigger." ~ Deacon King Kong by James McBride
10. "History is fucking wild." ~ When No One is Watching by Alyssa Cole