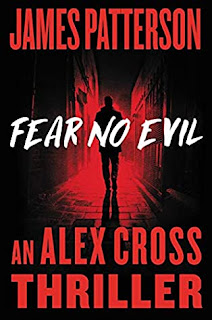 My Series Sunday pick is Fear No Evil, the 29th book in the Alex Cross series by James Patterson. Dr. Alex Cross is an investigative consultant to the Metro PD and FBI. Throughout the series, there has been an unidentified criminal named "M" that operated on the periphery of their investigations. He's sent messages, clues and has taken false credit for crimes over the years. "M" keeps up with their personal lives and randomly questions their investigative skills. But finally he may be caught!
"Alex says he's a brilliant psychopath. We believe he's been involved in mass murders, multiple kidnappings, and high-stakes rip-offs, among other crimes." ~ pg. 87
Alex, Sampson and Mahoney make such a formidable team. In Fear No Evil, they take on the cartel, a group of vigilantes that are kidnapping U.S. law enforcement agents and forcing confessions before executing them and the taunting "M." It is a lot!
It's been a hot minute since I've rated an Alex Cross thriller all five hearts. When a series gets to this many books (damn near 30), the characters get old and the plots start to slip. The hype fades. The thrillers aren't so thrilling. But in the case of Fear No Evil, Patterson—without a co-author—brought all of the action early on and kept up the pace. It is suspense from Chapter 2 to 105.
I don't know what rabbit hole of concentration that Patterson went into to write this latest installment of the Alex Cross series but well done, sir! You understood the assignment and delivered!
Title: Fear No Evil
Author: Alex Cross
Published: November 2021
Pages: 340
Edition: eBook
Rating: 🖤 🖤 🖤 🖤 🖤