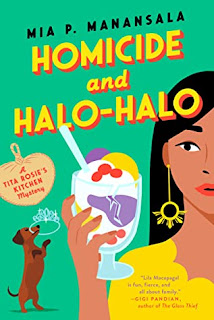 My Series Sunday pick is Homicide and Halo-Halo, the second book in the Tita Rosie's Kitchen Mystery series by Mia P. Manansala. In this fairly new series, Lila Macapagal is back. However, she is still not ready to open her new café after the first instance of unpleasantness at her Aunt's Filipino restaurant, Tita Rosie's Kitchen.
The small town of Shady Palms has resurrected the teen beauty pageant which Lila won many years ago. This win caused a wedge between Lila and her cousin Bernadette. But when the head judge of the pageant is found murdered, Lila must put aside their rivalry and help clear Bernadette's name as the main suspect. And highlight the tasty dessert known as halo-halo while at it!
"Funny how all it took was a gun-toting murderer for me to have an epiphany." ~ 90%
Slow and steady is this novel's game. The murder didn't occur until a quarter into the novel. The characters played a backseat to the boring sleuthing. Not exactly what I want in a cozy mystery. Honestly I was just here for the dessert, drink and food descriptions.
Homicide and Halo-Halo features an Asian-American lead. Yay for diversity! Per the Author's Note, she wrote this follow-up while in a rather dark place. All my positive thoughts and wishes for success are with the author Mia P. Manansala as she works through mental health issues brought about by the pandemic. She has a good series that I will continue to support despite this "just okay" rating.
Happy Early Pub Day, Mia P. Manansala! Homicide and Halo-Halo will be available Tuesday, February 8.

Disclaimer: An advance copy was received directly from the publisher in exchange for an honest review. Opinions are my own and would be the same if I spent my hard-earned coins.
Title: Homicide and Halo-Halo
Author: Mia P. Manansala
Published: February 2022
Pages: 336
Edition: eBook
Genre: Cozy Mystery/Crime Fiction
Rating: 🖤 🖤