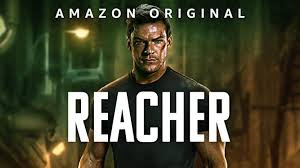 Retired Military Police Officer Jack Reacher is on screen! He is wrongly arrested for murder and finds himself in the middle of a dirty cop conspiracy. The businessmen and scheming politicians must clear the way for Reacher to clear his mysterious name and figure out what's really happening in Georgia. The first season of Reacher is based on Killing Floor.
Bookhearts know I am a huge fan of the Jack Reacher series by Lee Child. I tried watching the movie starring Tom Cruise but he was so far from the character that it was a no-go. Well Amazon Prime has an original TV series featuring actor Alan Richardson. He is perfect for the role far as physical traits of the fictional character. But the smart assy comments and humor comes off the screen as awkward. I am not sold. And the immediate love interest caused an eye roll. I'mma pass on this TV series and will just enjoy reading Reacher instead.
Title: Reacher
Author: Lee Child
Cast: Alan Richardson (Jack Reacher)
Network: Prime Video
S1 Premiere: February 2022
Episode Time: 1 Hour
Genre: Thriller
Edition: Paperback & eBooks
Challenge: Perpetual Jack Reacher
Book Rating: 🖤 🖤 🖤 🖤
Show Rating: DNF