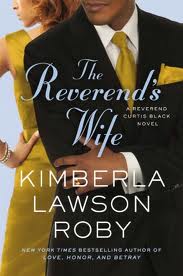 My Series Sunday pick is The Reverend's Wife, the 9th book in the Reverend Curtis Black series by Kimberla Lawson Roby. The story begins with Charlotte excited about the huge birthday bash that her and husband Reverend Curtis are throwing for four-year-old daughter Curtina. Yes, the stepdaughter she once hated. The stepdaughter she once refused to accept but now loves as her own child. But Charlotte's new acceptance of Curtina does not change Curtis' mind. He still intends to divorce her.


The well-known Reverend Curtis Black has been married three times. Followers of this series were hoping the third time with Charlotte would be the final charmed marriage. But Curtis just cannot forgive his third wife, Charlotte, for having affairs—yes, affairs is plural. Now the 12-month celibate Curtis Black is ready to chuck the deuces at this marriage and find another wife. After all, a pastor can't stay single in the church, and Curtina needs a mother.

Deliverance Outreach has been rocked with scandal again. Sound familiar? Well it is a common occurrence for the church congregation to be disappointed by their pastor's sinful actions. But maybe it wasn't entirely his fault this time.


This is a classic case of karma. After all of Curtis' philandering ways, he finally met his match. Charlotte dished more dirt in their marriage and didn't value the sanctity of their union. Of all the years reading the previous books in this series, I waited for this day to come. For karma to meet Curtis. But now I'm actually rooting on his side. Arsenio Hall type of rooting! I believe he is a changed man and deserves committed love. You'll have to read this installment to see if he finds it and with whom.


Kimberla's writing skills have not faded. These characters are familiar to us and therefore predictable. But the author's words and scenes are so realistic that it played out like a movie as I read along. A movie that I could figure out the ending to, but it still held my interest as it played out. I am looking forward to the next book and scandal in this series. Hopefully it will star Reverend Curtis and Charlotte Black's son, Matthew. He is entering college and it will be very interesting to see how he copes as an adult. Maybe he will attend one of the accredited online colleges which could help him cope.