Akhmed and The Atomic Matzo Balls 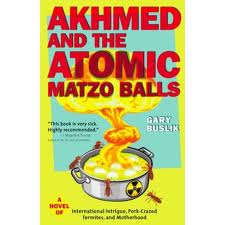 Meet Akhmed, the quirky Iranian president whose only regret was not hooking up with Rosie O'Donnell, who keeps magazines scattered on the floor near his bed, who eats matzo balls soup, has a short-man complex and is strangely paranoid. "Pork makes you stupid" is just one example of his classic one-liners. Interesting enough main character for you? Yes, indeed. But the president has a more elaborate, serious plan. He wants to destroy America by smuggling radioactive matzo balls into Miami Beach and detonate them with explosives.

Back in America, we are introduced to other characters. Professor Les Fenwich just learned he is a father of a 27-year-old Republican named Karma. Karma is soon to be married and wishes her "Popsie" to walk her down the aisle. Professor Les is unknowingly brought into President Akhmed's plan along with Karma's mother.

Akhmed and the Atomic Matzo Balls is not meant to be a fast read. In fact, I found it necessary to read at a slower than usual pace to keep up with the terrorist plot, the multiple characters and their individual plans. I also read slower to appreciate the witty one-liners and clever dialogue.

This novel is a fine example of creative writing. There is no other book that combines international leaders, bizarre circumstances, star-crossed academic lovers and radioactivity in a hilarious, sometimes offensive, and oh-so-entertaining setting. The cover is also striking and what I call "public-friendly." While reading Akhmed and the Atomic Matzo Balls in public, I was questioned twice about the book's contents. (Aside from the artsy cover, I was probably questioned because I literally laughed out loud from reading a funny passage.) It is definitely a conversation starter.

Check out Akhmed's video trailer and order a copy of this book. As a bonus, there is a recipe for Matzo Ball Soup, known as the Jewish "comfort food," included. Thumbs up to author Gary Buslik for writing this novel of "international intrigue, pork-crazed termites, and motherhood."

DISCLAIMER: This book was received directly from the author for review purposes only. In no way does it influence my review. The opinions I have expressed are my own.