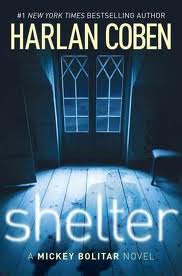 My Series Sunday pick is Shelter, the first book in the Mickey Bolitar series by Harlan Coben. Mickey was first introduced in Live Wire, the last book in the Myron Bolitar series. He's every bit as sarcastic, witty and smart as his uncle. The mature teen is also a basketball player, like his legendary uncle.

Mickey is still haunted by witnessing his father's death. His mom has never fully recovered from the loss either. Unfortunately, Mickey takes on more responsibility than a teen should and is the unofficial caretaker of his mother. After sending his mom to rehab, Mickey is forced to live with his uncle Myron, whom he dislikes. Along with adjusting to life without parents, Mickey has to adjust to a new high school and being stationary. Mickey spent his entire life traveling overseas while his parents worked for a charitable foundation. Now, he has the chance to stay in one place, make friends and hopefully join a basketball team. In his first days of school as a sophomore, he meets Ashley, a girl that has potential to be his girlfriend. Just when things are going smooth, Ashley disappears. Mickey is determined to find Ashley and follows a dangerous trail that leads to a conspiracy involving his deceased father.

What good is a main character without loyal sidekicks? Mickey becomes friends with two memorable characters: Spoon and Ema. Spoon is a smart kid that randomly states facts. Ema is a gothic girl that stays to herself. The three of them make quite the team.

Shelter is Harlan Coben's young adult debut. Well done, Harlan. Well effin' done. It is a great easy read for young adults and entertaining for grown folks as well. The story line is not juvenile or dumbed down for younger readers. This book has the same formula as other Coben books that his fans appreciate: fast-paced, multi-layered suspense and mystery with a dose of cheeky humor. The Mickey Bolitar series will definitely tide me over until the next release in the Myron Bolitar series.