Series Sunday: G is for Gumshoe 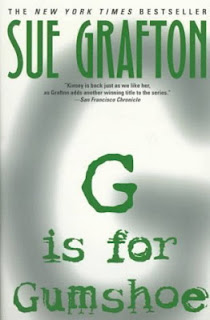 My Series Sunday pick is G is for Gumshoe, the seventh book in the Kinsey Millhone alphabet mystery series by Sue Grafton. EEK! Kinsey is on the top of a hitman's list! A criminal that Kinsey helped put behind bars has ordered a contract murder involving Kinsey, the DA and the judge who sentenced him. After being run off the road, Kinsey hires a bodyguard, Robert Dietz. Danger never hit this close to home. Pun intended.

Kinsey is hired by Irene Gersh to locate her elderly mother Agnes. Kinsey finds Agnes in a hospital. Aside from ramblings and short-term memory loss, Agnes seems frightened. But far as Kinsey is concerned, her work is done. Until Agnes dies of homicide and Kinsey wonders if the elderly lady's ramblings were really clues.

In G is for Gumshoe, readers learn a little bit more about Kinsey's past. I like how Sue Grafton is gradually feeding us tidbits about Kinsey's personal life. It keeps the mysteries realistic and builds suspense. Kinsey is slowly becoming one of my favorite characters in a series. She uses her wits and common sense to solve a mystery. She may not have graduated from college, but is an example of a successful career woman. I look forward to reading more and catching up on this series.