Series Sunday: H is for Homicide 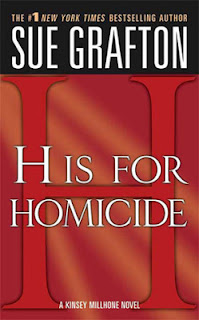 My Series Sunday pick is H is for Homicide, the eighth book in the Kinsey Millhone alphabet series by Sue Grafton. Private Investigator Kinsey Millhone has a business deal with California Fidelity Insurance (CFI). She leases apartment space in exchange for investigating a few insurance claims. Well "bureaucratic bullshit" forces the deal to be amended.

In the meantime, Kinsey accepts one last case of possible insurance fraud. Kinsey's colleague, Parnell Perkins, is found murdered in the parking lot behind CFI. The only clue to solving the murder is one of Parnell's files on Bibianna Diaz, a lady who makes a career out of filing phony accident claims.

Even though Kinsey hasn't worked for the Police Department in years, she goes undercover. Kinsey takes a "crash" course at the Southern California College of Auto Fraud. Nice twist! But I have a like/dislike feeling about H is for Homicide. I liked how involved Kinsey was in the current investigation, but the mystery was too predictable. Could I have been a sleuth in another life? Or is the series starting to slip? Hmmm, I will read further in the series to find out.