Series Sunday: I is for Innocent 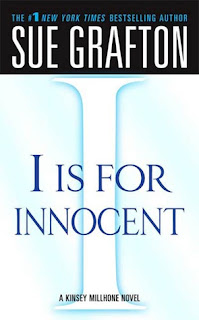 My Series Sunday pick is I is for Innocent, the ninth book in the Kinsey Millhone alphabet series by Sue Grafton. Private Investigator Kinsey Millhone agrees to take over another P.I.'s investigation after he unexpectedly dies of a heart attack. Morley Shine was one of the greats in the business so it should be nothing but tying up loose ends. However, Kinsey finds the investigation is not easy at all. Notes are in a disarray. Witnesses deny ever being questioned. Kinsey begins to doubt whether the accused is innocent after all.

The format of I is for Innocent was appropriate to the title. It favored a legal case—prosecution side, defense side, cross-examination and closing arguments. It was fast-paced and filled with more action than previous Kinsey Millhone books. Yet it was kind of predictable.

However, I am still a little iffy on whether the series is starting to slip but will continue reading further. It was just released that the latest installment (W) will be published later this year. I have a lot of catching up to do.