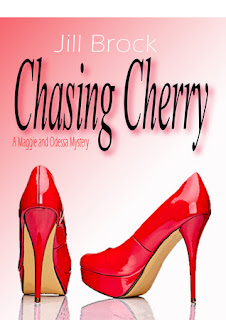 "Baking therapy should be recognized by the American Psychological Association." ~ pg. 215

My Series Sunday pick is Chasing Cherry, the fourth book in the Maggie and Odessa mystery series by Jill Brock. Ever since Odessa was dismissed from an advertising job and became a dessert chef, life has been anything but mundane. Maggie is a practicing P.I. that voluntarily gets involved in situations. This time the situation is closer to home. Bebe Dunn, the sous chef at Odessa's family restaurant, is charged with murder. Hot shot lawyer Thaddeus Ziemann is hired to clear Bebe's name and wishes the two amateurs, Maggie and Odessa, will stop interfering with this case. Ha! Good luck with that one, Ziemann.

Maggie and Odessa are determined to help Bebe and find the real murderer. Too many obstacles are in their way: lack of criminal law knowledge, a scary bodyguard and his music promoter boss, and Cherry—the only woman who can clear Bebe's name. Chasing down money-hungry Cherry is dangerous and difficult. But it is all worth it to help their beloved Bebe Dunn.

Chasing Cherry is another great addition to the Maggie and Odessa mystery series. Ms. Cupcake and Weather Girl are a hilarious pair. Their chemistry is undeniable. Their antics kept me entertained and flipping the pages. Jill Brock's writing has a way of transporting you to fiction world. I'm looking forward to the next installment, especially after the semi-cliffhanger. Nice writing, Jilly!

DISCLAIMER: This book was received directly from the author for review purposes only. In no way does it influence my review. The opinions I have expressed are my own.