Series Sunday: J is for Judgment 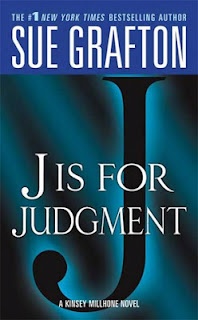 My Series Sunday pick is J is for Judgment, the tenth book in the Kinsey Millhone alphabet series by Sue Grafton. Wendell Jaffe has been dead for the past five years, or so everyone thought. His boat was found drifting off the coast. He left a note admitting to being broke with a bankrupt business and a criminal indictment soon to follow. With no corpse to prove Jaffe's death, California Fidelity paid the $500,000 life insurance policy to his wife. Until a former insurance agents spotted Jaffe at a resort near Cabo San Lucas. Now California Fidelity needs to rehire P.I. Kinsey Millhone to find out the truth: Is Jaffe dead or alive?

J is for Judgment is Kinsey's tenth mystery. It seemed more like a filler in the series than a strong installment. It was only 224 e-pages, but could have been shorter. Many of the pages were recaps or meaningless description. Again, I will stick to this series because it has earned my attention as a fan and I'm interested in seeing where the series goes.