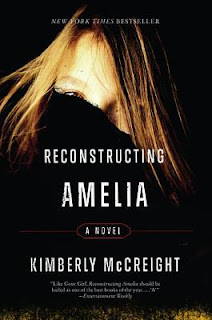 "Somebody who went to that much trouble not to talk about something probably had too much to say." ~ pg. 78

On October 24, Kate's life changed for the worse. She received a call that her A-student daughter was suspended for three days and had to be picked up from school immediately. But when Kate arrived at the school, she received devastating news from a detective. Her daughter, Amelia, fell from the roof; she unfortunately didn't survive the fall. Amelia was dead.

It didn't make sense. Amelia was not the kind of kid to get suspended from school, nor kill herself. So when Kate receives an anonymous text saying Amelia did not jump, she begins to trace the last six weeks leading up to her daughter's fall from the school's roof. She is determined to find out the truth by reconstructing her teenage daughter's life.

It took a few chapters to get into the book but I was interested in how the mystery would be solved. The story slowly unfolds through alternating points of view between Kate (mother), Amelia (daughter), Facebook (status updates by Amelia) and gRaCeFULLY (an anonymous blog). I liked this style because clues were revealed through different voices. I just wished it moved at a faster pace.

Reconstructing Amelia reminded me of a Lifetime movie (Sexting in Suburbia). This book may be fictional but shows a realistic view of bullying in schools and the devastating effect it has on students. At some point, school faculty and officials have to take responsibility. Even so, parents need to be aware of their teenager's actions on social media, interactions at school and familiar with their group of friends. Your presence as a parent is also necessary. Let this book be a wake-up call or reminder. Reconstructing Amelia is especially a good read for parents who like mysteries. Watch the book trailer below.