(Sequel to The Devil Wears Prada) 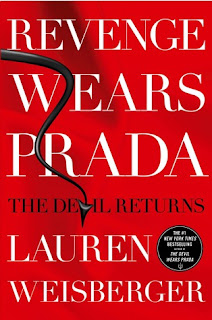 My Series Sunday pick is Revenge Wears Prada: The Devil Returns, the anticipated sequel to The Devil Wears Prada by Lauren Weisberger. It's almost a decade since Andy Sachs quit working for Miranda Priestly at Runway magazine. No one quite understands how Andy's dream job turned into a nightmare in less than a year. Now Andy and old co-worker/mentor/nemesis Emily are owners of their own high-end bridal magazine, The Plunge. The good fortune soon ends when Andy realizes her new marriage and business partnership are not what they seem, especially when it directly crosses the path of the devil herself, Miranda Priestly.

Let's analyze the cover first. Isn't it perfect? A striking red that will grab your attention on a bookstore or library shelf. As if the title alone would not refresh your memory, there is a small badge on the cover reminding us that Lauren Weisberger is the #1 New York Times bestselling author of The Devil Wears Prada.

Well the cover was what I liked best about this book. Maybe because the sequel was so highly anticipated, I expected more. The peak didn't come until toward the end of the book and was over in a few pages. As the author states in the video below, Andy and Miranda go at it again. Fans of the movie starring Meryl Streep may read this sequel at leisure. No need to rush and read how the devil returns. First-time readers may be more interested in the story and conflict.