Series Sunday: Entwined with You 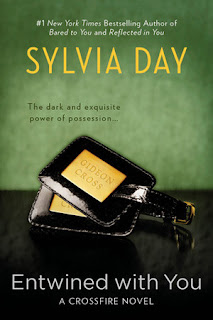 When a book is highly anticipated, I expect the author to bring it. When a book's expected publishing date is delayed (by months), I expect a polished plot. I don't expect a lackluster half-ass effort. I have looked forward to reading Entwined with You for about a year. Silly of me to assume the author would take advantage of the extra time between release dates and reread, rewrite, revise and improve the story. The Crossfire series was originally a trilogy. But Entwined with You was nothing but a filler. I cringe at the thought this is how the story of Gideon and Eva would've ended.

The worldwide phenomenon of Crossfire has fizzled. What used to be my favorite dysfunctional couple has now fell down the totem pole. I'm not even excited that the series has been extended to include two more books. Instead I feel like the author is exploiting fans by drawing this series out. It doesn't need five books, ESPECIALLY after this...this...disappointing installment. Yes, I am interested and will tune in to the TV series pilot but only because I am curious to see Eva and Gideon's story unfold on screen.

I'm just really, really disappointed with Sylvia Day (because she's a good writer despite this flop) and Entwined with You. I feel like a teacher who knows one of their star students' capabilities but they fail a research paper. Really, Sylvia?! You're a New York Times bestselling author. I KNOW you could have done better.

Check out the video below of Sylvia Day discussing the latest Crossfire novel, Toying Entwined with You Fans.