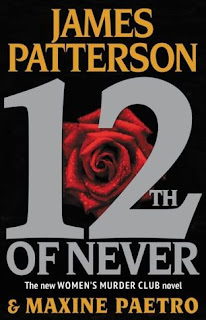 My Series Sunday pick is 12th of Never, the 12th book in the Women's Murder Club series by James Patterson. The novel begins with Detective Lindsay Boxer in labor. After only a week at home with newborn daughter, Lindsay returns back to work and takes on two big cases. A serial killer wakes from a two-year coma ready to reveal where bodies are buried but he'll only confess to Lindsay. A football player is the prime suspect in a murder. A child is missing. Yuki is working on yet another high profile trial prosecuting a disbarred attorney. Claire's position in the Medical Examiner's office is threatened. Cindy is obsessed with reporting a mystery. And an English professor with precognition sees murders in a dream before they happen. Detectives don't believe him until the murders happen, fitting to the last detail of the professor's description. But these cases all take a backseat when Lindsay and husband Joe are faced with a possible loss.

Sound like a lot going on? Well, it was. ADHD much? However, I welcomed the multiple cases and individual story lines. This element was missing from the last couple installments in this series and kept me entertained while reading. While some parts were predictable, I was actually caught off guard by one element toward the end of the book.

Is the old Patterson writing style back? No. It is apparent, now more than ever, that James Patterson no longer writes this series alone. He may write the outline, but I really wish he would stop slapping his name on the covers when we all know Paetro is the one who wrote the past WMC novels. Thriller it is not. But 12th of Never is one of the better recent releases.