The Butler: Movie vs. Book 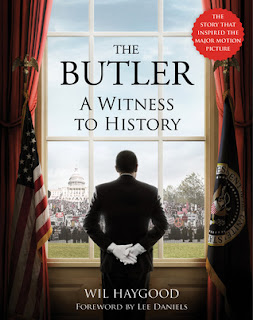 On the cusp of Obama's election, Washington Post writer Wil Haygood sought to find an African American butler. His goal was to interview a butler who witnessed the civil rights movement from inside the White House. In 2008, Wil Haygood found and met Eugene Allen, a remarkable man who worked as a butler in eight presidential administrations for thirty-four years, never missing a day.

"He had to take it in, decipher it, process it emotionally. He was, yes, the man with the tray, the medicine, the tea, the bowl of soup; he was the butler who fetched the president's straw hat, the president's wingtips. But he was also a black man." ~ pg. 34

From a plantation in Virginia to the most powerful home in the United States, Eugene Allen lived a grand life that was well displayed in the movie despite the fictional characters. However, the book lacked focus on this main character. The book was mainly about the presidential administrations and the nation's events rather than the butler himself. More information and stories about the man who was a fly on the White House wall would have made the book longer and more interesting. As such, I would have preferred the original article "A Butler Well Served by This Election" to be republished.

"The father, the butler, watching history turn, could not say a word. All he could do was stand there, frozen..." ~ pg. 20

The foreword is by director Lee Daniels. There are pictures of Eugene Allen, his family, the presidents he served and of the movie cast at the end of the book. In this regard, the book is a good complement to the movie. As a standalone, it was disappointing and left me wanting more. I would not recommend this book if you are interested in reading about the real life butler.

DISCLAIMER: This book was received from the publisher for review purposes only. In no way does it influence my review. The opinions I have expressed are my own.

Posted by Literary Marie at 8:14 PM