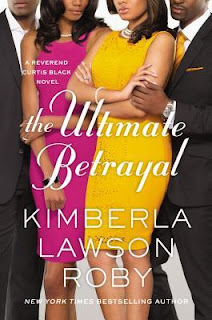 My Series Sunday pick is The Ultimate Betrayal, the 12th book in the Reverend Curtis Black series by Kimberla Lawson Roby. Daughter of the infamous Reverend, Alicia Black, is dating her first husband Phillip. The man of god, Phillip, has forgiven her for cheating on him and ruining their first marriage. Now it is finally time to jump the broom again. But Alicia feels something is missing, that something is off with her love of Phillip. Yes, of course she loves him. But is she in love with him? Does she yearn for his touch like she does for Levi's? Levi is the drug dealer Alicia had an affair with. He is recently released from prison and still head over heels in love with Alicia. Temptation knocks on Alicia's door once again.

Melanie, Alicia's best friend, is spiraling downhill. She struggles to keep her marriage together with her husband's seemingly reckless financial spending. She is also hell-bent on losing those last ten pounds. Alicia and Melanie's husband try to intervene before her weight loss obsession turns to anorexia.

This 12th installment of the Reverend Curtis Black series is the same 'ole, same 'ole shenanigans within the Black family. New relative, same story. How many times is Kimberla going to prove the apples don't fall far from the tree? By now, I realize infidelity and trust are the series themes. However, I would like at least one book where there is no cheating on spouses. Drama makes the Black family go round but can we get a book with nothing but praises be to God?

I had to mull over the ending of The Ultimate Betrayal. It was so far left field and out of character that it belonged on the big screen. I literally turned the last page of the galley and blinked slow for minutes.

When I put aside that the story line was redundant with a twist, I enjoyed this quick read. A do-good character that always rubbed me the wrong way proved my instinct was right. An existing minor character, Alicia's best friend Melanie, was brought to center stage. What a bittersweet treat! I love how Kimberla focused half of the book on Melanie and her issues. The bitter part of Melanie's story line is her mother, who is the literary version of Mama Joyce on RHOA. I'm looking forward to reading an update on her in an upcoming installment and hopefully other new characters. Unless of course this series is sadly coming to an end.

"We were so in sync that not even the best writer alive could properly describe it." ~ pg. 70

I hope my review does not come across as harsh. Despite my dislike for the mundane story line, I really did enjoy The Ultimate Betrayal and recommend fans of the series don't miss reading it.