Series Sunday: Addicted With a Twist 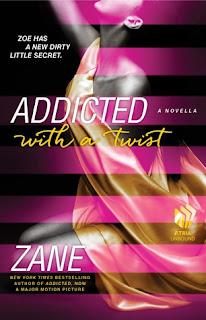 My Series Sunday pick is Addicted With a Twist, the sequel to the popular novel, Addicted, by Zane. A married woman's life spirals out of control with her three affairs. Picking up three years later, Zoe and Jason are still married but slipping back into her old ways, she has a hotel rendezvous with a man called Orpheus. It appears Zoe has not overcome her sexual addiction.

I have not read Zane in umpteen years. Though I have most of her earlier books in my personal library, her stories began to all read the same. Too predictable erotica. Too comfortable in being the current hot author. Too book production line. So I stopped reading Zane. But while browsing an online bookstore, I came across Addicted With a Twist. I never knew this book existed!

Addicted With a Twist is a super short eBook at less than 30 pages; hence why I dubbed it #1.5 in the series. It is straight to the point and a quick glance into how Zoe, her momma, Jason and Orpheus are doing. It will only take a few minutes to read so I suggest borrowing from the library.