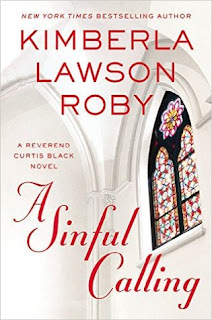 My Series Sunday pick is A Sinful Calling, the 13th book in the Reverend Curtis Black series by Kimberla Lawson Roby. She is one of the few authors that I "shelf stalk." I stay current with new releases and blessed to have received an advance copy for my honest review. This 13th installment of the series is a doozy, bookhearts!

A Sinful Calling is a literary soap opera. Dillon, the Reverend's firstborn child, does not fall far from Adam and Eve's apple tree. Though his actions are almost identical to his father's, he is determined to be a bigger and better Reverend. Marital issues be damned. His goal is to create a mega-church with a larger congregation. It is Dillon's top priority to destroy the infamous Reverend Curtis Black.

Alicia, the Reverend's second oldest child, is also estranged from the family. Still grieving the loss of her ex-husband Philip, she deals with adjusting to her new marriage to Levi, the former drug dealer she had an affair with. The only confidante she has is brother Dillon. Alicia even left her father's church to join Dillon's congregation as COO. But it all makes Alicia hide a disturbing secret that threatens her life and those around her.

"Well, I think one of the saddest things I see are phony Christians." ~ 34%

Some series are only good for a few novels. A lot of series fall off after ten books. But Kimberla Lawson Roby continues to write a strong Reverend Curtis Black series with thirteen books to date. The central themes are still revenge, church scandal and family drama; although, it began on a slower tamer pace and didn't pick up until thirdway through. The main characters in A Sinful Calling—Dillon, Raven, Alicia and Levi—remained true to their fictional personalities making it a little predictable as to their actions. But a famous Kimberla twist threw me for a loop.

Was A Sinful Calling worth my shelf stalking? Yes! Such a fitting title. So grab it when published on June 21, 2016.