The Girls in the Garden 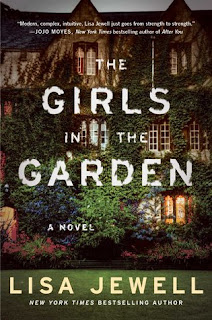 "I'm starting to think there's something not right about this community." ~ pg. 54

No shit, Pip (squeak). Picture a communal garden square in urban London where children run in and out of other people's houses. The neighbors have known each other for years. You trust that your children are safe. But on a summer night as a neighborhood party is taking place, 12-year-old Pip discovers her 13-year-old sister Grace lying unconscious in the garden. What happened?

Before I delve further into my review, let's look at the gorgeous book cover. It would certainly catch my attention on a bookshelf. Well designed!

Now on to the book itself. I enjoyed Lisa Jewell's other novels so I assumed this would be a suspenseful page-turner with characters I could connect to. Hmmm, perhaps it was because I figured out the mystery early on, but The Girls in the Garden was meh. Pip was an okay narrator but the chapters focused on other characters were a bore. It was very slow-paced; although, the book started off with the main incident and the book was separated into "before" and "after" sections. Great layout but not-so-good content. Pass on it, bookhearts.