Adnan's Story: The Search for Truth and Justice After Serial 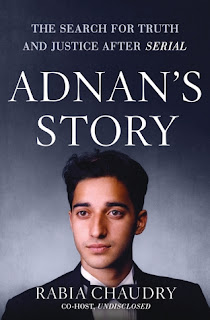 "If there is one takeaway from Adnan's story, it should be this—the criminal justice system is not just deeply flawed, it is broken." ~ pg. 394

If you don't recognize the name "Adnan Syed" then just stop reading this review now. I don't know where you have been or why, but clearly you are out of the loop. The loop of a true crime told via the popular phenomenal podcasts called Serial, Undisclosed, and Truth & Justice with Bob Ruff. Additionally, if you are not familiar with podcasts #periodt, then I really encourage you to stop reading this review and get your life together.

Bear with me while I give the gist of this true crime story gone viral. On January 13, 1999, a high school senior in Baltimore, Maryland, named Hae Min Lee went missing. She was later found dead in Leakin Park. In early 2000, Adnan Syed was convicted and sentenced to life plus thirty years in prison for the murder of his ex-girlfriend. By 2013, almost all appeals had been exhausted. But family friend, Rabia Chaudry, believed in Adnan's innocence. She contacted a producer of This American Life, Sarah Koenig, in hopes of finding a journalist to shed light on Adnan's story. Maybe media will help. In 2014, Sarah Koenig's investigation into the murder of Hae Min Lee turned into Serial podcast with more than 500 million international listeners.

"The stress didn't just come from dealing with Muslims, Muslim leaders, Reddit and trolls, though; it also came from the content of the podcast itself, and most importantly, from Sarah." ~ pg. 270

But the story did not end after twelve episodes of Serial. A new podcast titled Undisclosed started featuring Rabia Chaudry. Another podcast popped up titled Truth & Justice with Bob Ruff continuing the investigation. And now we have a new book written by Rabia that presents new key evidence to dismantle the State's (already sloppy) case against Adnan Syed. Told in a hard-to-put-down narrative, the story and crowd-sourced investigation continues.

So is Adnan's Story worth reading? OH EM GEE YES! There are details within these pages that none of the three (3) previously mentioned podcasts revealed. It is page-turning. Beyond gripping. Attention f'in grabbing. Compelling narrative. Mind-blowing documentation and analysis of new key evidence. Never-before-seen letters from Adnan himself and his one theory of what really happened. Need I say more?!

"Maybe I could not prove I did not kill Hae, and maybe I would spend the rest of my life in prison." ~ pg. 219

I rate Adnan's Story 4/5 hearts because I don't believe the author's intention to create doubt in my mind was purposeful. Before reading this 400+ page book, I was firm in my belief that Adnan Syed was innocent. But after finishing this very good detailed book, I am not sure. Rabia, I know your intentions are purest of the pure, but it is my strong opinion that you should have waited to publish this book. If I have doubts now, I am sure other readers do too. But one fact remains: we still need the truth and justice for Hae Min Lee.

Bookhearts, Adnan's Story is a must read if you are still obsessed with Adnan Syed's case like I still am. Feel free to contact me to discuss as you read along. I am bursting at the seams to talk about this book in detail!