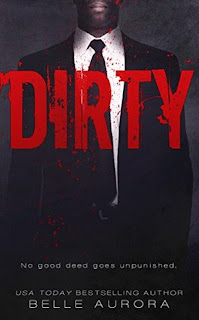 "Don't ever mistake my femininity as weakness. I will slit your motherfucking throat while reapplying lipstick." ~ 33%

My Series Sunday pick is Dirty, the second book in the Raw Family series by Belle Aurora. From the outside looking in, beautiful 24-year-old Alejandra has a perfect life that everyone envies. She is mob royalty as the wife of Dino Gambino and the daughter of Eduardo Castillo. But behind bedroom doors, Alejandra is a woman more hurt and torn apart than put together. Forced into marriage at a young age, Alejandra accepts her fate as the abused wife of a powerful mob not-so-quite boss. Understanding the philosophy of family and loyalty, she plays the dutiful mob wife until an opportunity arises for her to get out the life. Never did she imagine that other lives would be deeply affected, some even murdered. Enter Julius Carter, the handsome light brown-skinned, blue-eyed handler. Now Alejandra is a dead woman walking in need of saving.

"The expectation of love versus the reality is two completely different things." ~ 90%

Funny you write that, Belle, because the expectation of a sequel versus the reality is also two completely different things. Where is Lexi and Twitch? Yes, there are cameos and a few chapters from Twitch's point of view, but I wanted the whole book to feature these two beloved characters that left me wanting so much more after reading the unconventional love story in Raw. Though the story of Alejandra and Julius is good in its own right, I did not ask for this! Not yet anyway. I did not wait damn near three years for the story told in Dirty.

Bookhearts, if you followed my March 2014 recommendation to read the first book of this series, Raw, then you should expect the same level of violence, graphic scenes and strong language. This series is not for the easily offended. I put my pearls away while reading Dirty. I sipped red wine that stained my lips instead of my usual cup of hot tea. Get my drift?

Belle, I appreciate the crumbs you dropped on October 31, 2016. But you knew good and well it is not what us fans expected. We need a sequel, not a spinoff! Again, Dirty is a good book but c'mon with RAW: Rebirth because I am ready to see what happens now that {loses wifi signal}