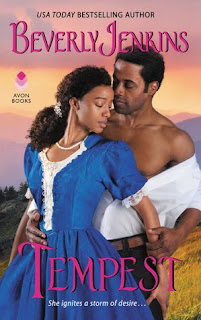 My Series Sunday pick is Tempest, the third and final book in the Old West series by Beverly Jenkins. Greeting your husband-to-be with a bullet is probably not the best idea. But it was an honest mistake. Mail-order bride, Regan Carmichael, is an independent woman with plans to marry a man she's never met. Widower Dr. Colton Lee is seeking a wife not for love but to care for his daughter. He doesn't expect a fierce beautiful woman that can literally shoot her shot. Tempest is the story of making this match a true union.

Funny how I am not a history buff. Nor do I like westerns. And I especially do not like cheesy book covers. But damnit if I do not love this Old West series by Beverly Jenkins. In true Cass Technician fashion, Jenkins is thorough in her research, providing readers with history education and a love story worth swooning over. Tempest was the best ending to the trilogy. I wish there was more!