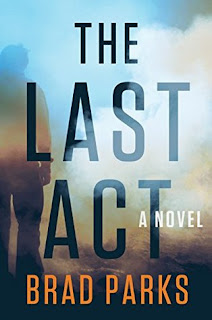 My Series Sunday pick is The Last Act, the first book in the series of same name by Brad Parks.

But first...there is a prequel titled The Whistleblower that helps set the stage for a suspenseful thriller. Mitch Dupree landed his dream job: bank compliance director. It is his job to abide by Know Your Customer (KYC) regulations with a Cover Your Ass (CYA) mentality. After all, banks are the first line of defense against illicit transactions. He notices suspicious activity and what may possibly be money laundering transactions made by a drug cartel. He is faced with an ethical issue: turn a blind eye and protect the family atmosphere at work or blow the whistle.

"If a bank is willfully breaking the law, they're going to get away with it. It's only the people who are trying to follow the law who get screwed." ~ 63%

Struggling actor Tommy Jump is offered the role of a lifetime: $150,000 for a 6-month gig. But it comes from an unlikely employer: the FBI. Feds arrested Mitch Dupree, a bank compliance director, who for the past four years appeared to be laundering money for one of the deadliest drug cartels. Dupree has documents that could lead to way more arrests and personally take down the cartel's leader. It is Tommy's job to enter the prison and act like an inmate. More specifically, he needs to get close to Dupree in hopes of revealing the documents whereabouts. It is a dangerous job and may be Tommy's last act.

A snow day couldn't have come at a better time. It allowed me to spend the day wearing pajamas while reading this new 400+ page book uninterrupted. And oh, did I ever need a lazy day for this gripping tale of deceit! What made it more engaging, is that it's loosely inspired by a true story. Wachovia Bank failed to apply anti-money laundering laws on $378,000,000,000 (BILLION) worth of transfers to and from Mexican currency exchange houses. This directly tied the Mexican drug cartels to the U.S. banking system. It was the largest violation ever uncovered in our country. So much for the war on drugs. 🙄

"Books would be written. Movies would be made. Glory would be achieved." ~ 88%

This new novel is proof why Brad Parks is an international bestselling author. While I enjoyed the well-paced novel and the likable main character, Tommy Jump, I would totally be okay with this being a standalone. There were no major loose ends so it feels complete. How about a movie adaptation instead?