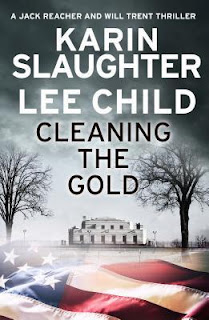 My Series Sunday pick is Cleaning the Gold, book #23.6 in the Jack Reacher series by Lee Child and Karin Slaughter. Why did I just discover this mid-series-mini-collabo-whatever-you-call-it short story? It is perfect to finish off my Perpetual Jack Reacher reading challenge for the year. Just published in the spring, apparently it has been years in the making but escaped my notice until now.

Will Trent goes undercover at Fort Knox. His current assignment is investigating a 22-year-old murder. The suspect is Jack Reacher, also in Fort Knox bringing down a dangerous criminal ring operation in the military. Though there is a bigger conspiracy at play that force the two men to team up and play nice...for now.

Authors Lee Child and Karin Slaughter are friends and fans of each other's writing. Of course they've had conversations on what their series characters would do if they met. Welp, it happens here! Jack Reacher meets Will Trent in Cleaning the Gold. It is fifty (50)* pages of not knowing who wrote what and watching a friendship unfold between legendary characters. I may not care for the cover (bye, flag) but the content sure held my attention. Glad I came across this one!