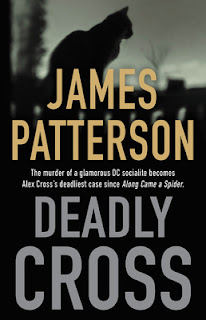 "It was incredibly paranoid, delusional, and hard to follow." ~ 57%
My Series Sunday pick is Deadly Cross, the 28th book in the Alex Cross series by James Patterson. I can count on two things every November: a Thanksgiving feast and a new Alex Cross novel. The latest opens with a scandalous double homicide in the nation's capital. A tryst gone deadly! Randall Christopher, respected educator and community advocate was caught literally pants down alongside Kay Willingham, the socialite, philanthropist and ex-wife of the sitting Vice President. They were murdered inside a luxury limo setting off a pattern of "Shoot the Rich" shootings.
The secondary mystery is pulled from headlines: missing girls that are put on the back burner until competent detectives are on the case. Our girls have been going missing for years and society as a whole doesn't bat an eye. That's a whole 'nother discussion but I am glad Patterson brought it to fiction meant for the masses.
"But I'd spent the majority of my adult life confronting murder, and there was only one way to do it well: divorce yourself emotionally from the victims. In this case, that was going to be difficult." ~ 5%
Back to the novel...Dr. Alex Cross and best friend, John Sampson, of the DC Metro Police team up to do what they do best: solve murder mysteries! But a tragedy hits close to home and will touch readers' hearts. How the main characters cope while also solving murders, kidnappings and rapes is beyond me. They make it happen with still being realistic and aware of their grief.
There aren't many series that make it to almost 30 books, let alone stay interesting. While Deadly Cross took me nearly a month to finish reading because of my own end-of-the-year frenzy, it was a good read and addition to the series. Thanks for being consistent, JP!
Title: Deadly Cross
Author: James Patterson
Published: November 2020
Pages: 369
Edition: eBook
Challenge: Keeping Up with Patterson
Rating: 🖤 🖤 🖤 🖤