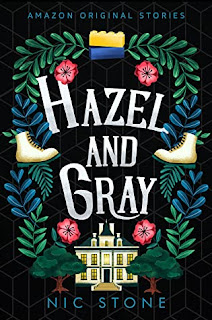 My Series Sunday pick is Hazel and Gray, a short from Amazon Original Stories by Nic Stone. Which would you pick: roaming around lost in the dark woods or enter a nice house full of phones and food? The latter, yup me too! Hazel defies her stepfather and goes out with her boyfriend, Gray. They somehow get lost in the woods, with dead cell phones and past curfew. But there is a mansion with an open door. The young lovers quickly decide that what lies ahead in the middle of nowhere is better than the punishment that lies at home.
"You ain't never heard the story about that brother and sister who got lost in the woods and almost ate up by a witch?" ~ pg. 16
The "Faraway" collection has a gem! Hazel and Gray is a modern retelling of the famous fairy tale, Hansel and Gretel. It is intriguing, dark and a bit disturbing. But Nic Stone pulls it off with her skilled writing and descriptive scenes. Even though it is a short story, readers learn a lot about Hazel and Gray's upbringing and enough background to set up the twist, bringing the story to a satisfying end.
Don't sleep on these Amazon Original Stories. Free for Amazon Prime and Kindle Unlimited members or just $1.99 for the eBook. They are perfect for reading in one sitting and great to kick start your reading goals this year!
Title: Hazel and Gray
Author: Nic Stone
Published: December 2020
Pages: 29
Edition: eBook
Rating: 🖤 🖤 🖤 🖤