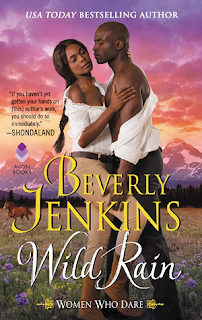 My Series Sunday pick is Wild Rain, the second book in the Women Who Dare series by Beverly Jenkins. The setting is mid-April in Wyoming Territory. Spring Lee, a woman rancher, is driving through a blizzard when she notices a horse sans rider. Soon after she spots a man covered in snow and limping up the road.
It turns out that Garrett McCray is a newspaper reporter/carpenter looking to do an article on Dr. Colton Lee for his father's Black newspaper. Instead he is fascinated with Dr. Lee's sister, Spring, the daring woman dressed in a men's shirt, denim pants and a gun belt. She is the epitome of unconventional woman. Spring isn't looking for love but their attraction grows.
"A freeborn man named Harris helped me learn, and it was life changing. Once I began I never stopped. I have a book or newspaper with me wherever I go." ~ 67%
As with other Beverly Jenkins novels, there is a history lesson woven into the fiction. Wild Rain takes place after the Civil War. A period when most women weren't wearing denim but expensive gowns instead. Spring Lee is unapologetically independent too, which impresses oh-so-sweet-cinnamon roll Garrett and sets the tone for a natural romance to unfold.
What kind of book starts with a woman saving a man? A historical romance by the great Ms. Bev! I am loving the Women Who Dare series. It features women that do not live by society's standard. Women that are free, bold, fierce and comfortable in their own skin. And best of all in Wild Rain, Ms. Bev gives a tribute to women who prefer to be child free. Thank you!!!
"You are diamond-hard in mind and spirit. You glow inside with the fire of rubies. And you're as vibrant as a sapphire when we make love." ~ 89%
I adore this couple and expect to see them mentioned in the last book of series, as is the custom. Although, Bookhearts not familiar with the Women Who Dare series can certainly read Wild Rain as a standalone. Whether you are new to the series, new to the author, or a longtime fan such as myself, pre-order Wild Rain and plan to read this good Western romance during Black History Month.
Disclaimer: An advance copy was received directly from the publisher in exchange for an honest review. Opinions are my own and would be the same if I spent my hard-earned coins.
Title: Wild Rain
Author: Beverly Jenkins
Published: February 2021
Pages: 384
Edition: Galley
Rating: 🖤 🖤 🖤 🖤 🖤