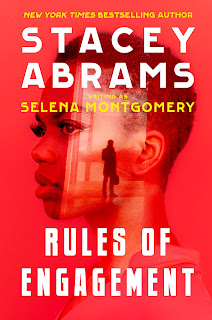 "Trust was the currency of fools in their world, and he'd gambled on her and lost." ~ 90%
Dr. Raleigh Foster is an operative for a top-secret intelligence organization. Undercover work has its risks though she does not hesitate when asked to infiltrate a terrorist group that has stolen lethal technology. The hard part of the assignment is her partner—Adam Grayson, posed as her lover. Adam blames himself for the botched mission that killed his best friend. But he believes that Raleigh also contributed to the death. Nevertheless, his feelings of suspicion and hate turn to trust and desire.
Perhaps I was too excited to read another Stacey Abrams writing as Selena Montgomery novel. Maybe my expectations were too high. I was tempted to DNF at least three times but held on to the hope it would becomes less confusing and finally flow. There are too many characters. The espionage plot is over my head. The objective is hard to follow. The only thing I clearly understood were the clearly stated rules of engagement...I think. A book is just not enjoyable when I am totally lost. It can very well be my own lack of following so please read an excerpt or other reviews first.
Happy Early Re-Pub Day, Stacey Abrams! Rules of Engagement will be available Tuesday, September 6.
Disclaimer: An advance copy was received directly from the publisher in exchange for an honest review. Opinions are my own and would be the same if I spent my hard-earned coins.