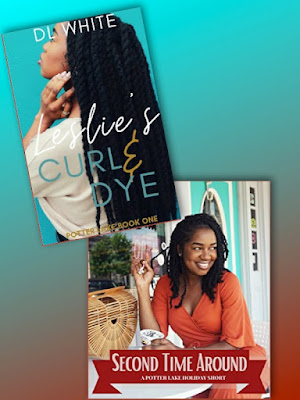 "If the barber shop was where men gathered to bond with other men, chat about man things and dap each other up, then the beauty shop was the same for women. It was where we found solace and camaraderie, and a bit of gossip on a hot day in a full salon." ~ pg. 2
My Series Sunday pick is Leslie's Curl & Dye, the first book in the Potter Lake series by D.L. White. Bookhearts know that small town series with characters of color are my jam! I don't know what it is about made up towns that make me giddy for new stories. I get lost in the fictional streets, caught up in the drama, imagining myself as a neighbor to the romance and enjoy the ride of new characters. Let's double dive into this new-to-me series!
Potter Lake is a Black mini-metropolis set in middle Georgia. The lakeside residents are strong-minded, resilient and destined for growth. The newly elected Mayor is a former NBA athlete named Kade Cavanaugh (KC). He also owns Guys N'Dolls, the new co-ed salon in town that directly competes with his college sweetheart's beauty shop. Leslie Baker is the inherited Curl & Dye owner currently struggling for business. But KC has a plan to fix that. The cliché proves right once again: if you can't beat 'em, join 'em!
"Try having a private life in this town." ~ pg. 128
Why, oh why, did I let Leslie's Curl & Dye sit on my Kindle unread for two (2) whole years?! My purchase date was March 24, 2020; do you see today's date?! Well no better time than the present perfect afternoon with no plans so that I could fully enjoy its content then excitedly move on to Second Time Around.
Sage Owens and Bennett Alexander are new to Potter Lake. Both seasoned with age, they have a lot in common on the surface. Their souls are drawn together, perhaps proof that broken hearts are connected. It makes their meeting seem more like fate than by accidental repair. Their story continues the theme of second chance love. This holiday short packs a lot of cute mature romance!
"And even more so when I learned you were a widow. There's a special understanding between us." ~ pg. 38
I began the series rooting for the growth and success of the Curl & Dye. I wanted the dwindling customer base to see success for its third generation. For the owner to work it out without help from a man. But the budding romance was what won me over.
In Second Time Around, it was the grown flirtation for me. Even though the characters seemed way more older than the 40-ish age they were written as. Their kids were grown and their speech was dated with phrases like, "getting fresh." It threw me off.
While the endings are predictable like most romance stories, the main characters' chemistry is magnetic and blooming off the pages! The author gracefully worked her pen when creating Potter Lake and its charming residents. I have one more chance to join their love-filled community when I read the third—and hopefully not final—book of the series.
Title: Leslie's Curl & Dye
Author: D.L. White
Published: September 2017
Pages: 316
Edition: eBook
Rating: 🖤 🖤 🖤
Title: Second Time Around
Author: D.L. White
Published: December 2018
Pages: 100
Edition: eBook
Rating: 🖤 🖤 🖤