Series Sunday: To Catch a Raven 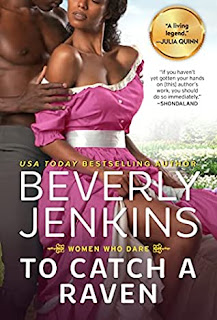 My Series Sunday pick is To Catch a Raven, the final book in the Women Who Dare trilogy by Beverly Jenkins. Raven Moreaux is a self-proclaimed proud grifter. She comes from a long line of liars, cheaters, thieves and conmen. She's a little too good at what she does; her crafty work acknowledged by the government. So much so that Raven is hired and forced to do a job.
Raven is tasked with going undercover to recover one of the original copies of the Declaration of Independence stolen by a former Confederate official. She poses as the housekeeper while the oh so handsome Braxton Steel is her husband, working as the driver. They both hold their families fate in their success of completing this job while also fighting to protect their hearts and opposite ways of life.
"Love me like he loves breathing." ~ 42%
Let's be clear...Ms. Bev never disappoints! She shows up and shows out. I know when I get my grateful hands on an advance copy of a Beverly Jenkins release, that I will be in bliss reading for a couple days, preoccupied with the romantic storyline, taking notes and googling historical references (such as The Mississippi Plan, yellow fever, Black soldiers of the Massachusetts 54th, etc.) and ending with the notion that love happens when you least expect it.
I have thoroughly enjoyed this Women Who Dare series. It features fierce independent women in circumstances that seem impossible to survive. To Catch a Raven is no exception and sadly concludes this trilogy with a pang of passion. Braxton and Raven fell into a deep steamy romance but the development of their relationship along with a side of suspense was the real treat.
"Her sarcasm rivaled her beauty." ~ 11%
Even if romance is not your thing but history and a good plot is your jam, then I highly recommend reading To Catch a Raven. Go ahead and add to your reading lists and pre-order now.
Happy Early Pub Day, Ms. Beverly Jenkins! To Catch a Raven will be available Tuesday, August 23.

Disclaimer: An advance copy was received directly from the publisher in exchange for an honest review. Opinions are my own and would be the same if I spent my hard-earned coins.
Title: To Catch a Raven
Author: Beverly Jenkins
Published: August 2022
Pages: 304
Edition: Galley
Genre: Historical Romance
Rating: 🖤 🖤 🖤 🖤