What a perfect choice to end Our History Month! 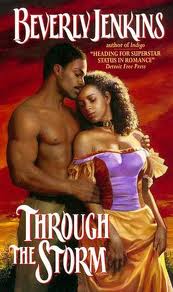 The oh-so-handsome Raimond Le Veq from Indigo is back. He is a major in the U.S. Army, and perhaps the only black major outside of Louisiana. He is used to women falling all over him begging to be a mistress. But beautiful green-eyed freed slave Sable Fontaine captures his heart from the moment she showed up alongside Mrs. Harriet Tubman. He begins to court her at the contraband camp. And Sable finds herself falling in love with the major. Then one night shots are fired. The camp must close. And Sable finds herself in a state of panic. She doesn't want to be re-enslaved; so she steals gold coins from the major and escapes the camp before her old Master reclaims her.

Fast forward to the next year. Raimond Le Veq is back home in New Orleans after the war. He needs to marry and have a child to claim the fortunes of the House of Le Veq. Raimond leaves it up to his mother to find him a wife. He doesn't wish to know her. He doesn't wish to love her. He doesn't plan to give up mistresses either. But his mother chooses the one woman who broke his heart and trust, Sable Fontaine. Fate has brought them together and they marry for convenience. Sable tries her hardest to convince Raimond of the truth and hope he forgives.

Michigander Beverly Jenkins is an awesome author. She writes historical romance fiction like no other. I love the history lessons and facts within the pages of her books. There are also appearances by Harriet Tubman, Fred Douglass, Galeno Vachon and wife Hester. Ms. Bev also adds in the perfect romance story that melts your heart and ignites passion.

Download or borrow Through the Storm today to find out what "ma reine" translates to and how it refers to main character, Sable.