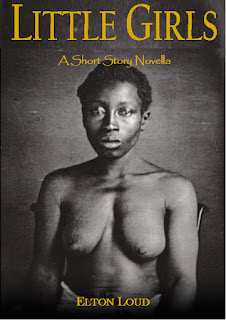 Book Synopsis:
The place is Oakland. The year is 2004.

Little Girls: A Short Story Novella is a collection of linked short stories that focus on a group of characters whose connection to each other is the sex trade in the Oakland Bay area.

More than a collection about prostitutes or prostitution, Little Girls examines the complexities of the human condition, cutting across generations of family to reveal the people, places and history that have formed their identities and motivations. Mistakes will be made. Lessons will be ignored. Consequences will be deserved.

Each story is unique, and will grab and hold the reader from the first line.


About the Author:
Elton Loud is an attorney and author living in Washington, D.C. His short story collection, Little Girls: A Short Story Novella, has just been published and is available now at Amazon. His forthcoming novel, Little Girls: A Novel, will be released in September.

“God-dammit.”
Doris mumbled as she yanked her finger away from the cast iron frying pan that popped violently with lard.  Full of superstition—the type to rub an aloe plant on everything: scraped knee, STD, gunshot—Doris was more than familiar with non-traditional home remedies.  Finding her own way, she took a sip of castor oil and put a slice of butter on her finger before turning off the burner and walking out of the kitchen.
Doris stepped onto the porch and lit a cigarette, creating an aromatic medley of catfish and nicotine that hovered over the house like a cloud.  She raised one eye at the teenage boy gripping a young girl’s arm as they walked past the neat, well-kept houses that lined the block.  Doris watched as an older teen followed closely behind the two, and paid even closer attention to the large pistol bulging from his waistband.
Doris looked across the street and made reassuring eye contact with her neighbor, Ms. Irene, who, in return, gave a raised eyebrow and a head shake, before closing the curtain.  Ms. Irene’s husband, Cleotis, remained in the bedroom window above, watching the group closely as they moved up the block.  The presence of the trio—though not a completely unusual spectacle for the neighborhood—caused the curtains in several of the homes on the block to pull open, then close as the group passed each house.
In the background, Doris could hear the screeching tires of a Corvette Stingray spinning tight, circular donuts at the end of the block.  Within seconds, a thick cloud of smoke filled the intersection and pushed toward her house and through the remainder of the block like a heavy fog.  As the car came out of the last turn, it sped down Doris’ street, leaving the smell of burnt rubber in the air as it continued on through the stop sign.
With a cigarette in one hand and a cup of Budweiser in the other, Doris walked off of the porch and into her small front garden.  She nestled into a well-worn folding chair sat tucked in the center of a throng of purple lilacs that seemed to overwhelm the front yard—in some ways drowning out the house as an afterthought.  The lilacs sat shoulder-to-shoulder with a large rose bush that, together, stood as the perfect complement to the neatly trimmed lawn—which had a deep, one-inch edging around the perimeter.  A solid evergreen shrub stood protective over a group of lively azaleas, completing the garden, and leaving just enough room for a single chair, which was how Doris liked it.
After taking a sip of beer, Doris tilted her head behind the rose bush as if hiding from the unwanted gazes of the rusty Mercury Monarch parked in Jerri-Ann’s front yard next door.  When she thought the car could no longer see her, she put the cup down and closed her eyes.
Doris sat at the center of a horticultural universe uninterrupted by the elements of the outside world.  Years of attentive gardening had created a small oasis that presented a feeling of calm, and peace; a feeling that was also appreciated by the small neighborhood animals that gathered in her yard and her yard only.  The animals seemed to use the enclosed garden as a personal arboretum; a botanical refuge to escape the ills of the urban city.  It was almost as if the birds, chipmunks and squirrels equally disdained kids drinking malt liquor and cars spinning donuts as much as Doris and her neighbors.
Doris, like many of the older residents on her block, had conflicted feelings for her Sobrante Park neighborhood.  While she resented the negative changes the neighborhood had experienced over the years, she had lived there most of her life and could not imagine living anywhere else.  She compared the bond with her troubled neighborhood to the ebb and flow of an abusive relationship—an upending cycle of love, pain, dependence and fear; with the occasional punch in the stomach for talking back.
What Doris did not know was that the truth was in the ground and the air and water around her.

Little Girls: My Journey from Legal Jurisprudence to Fiction Writing
By Elton Loud
In law school I often heard people say that most lawyers had a novel tucked away in a drawer somewhere (or, in some cases, a stage-play).  I was no different.  Except for me it was short-form story telling.  As a law clerk to a judge with a heavy criminal docket, I spent my days cranking out judicial orders that answered a variety of legal questions.  My nights, however, were spent creating and editing short-stories about issues just as varied as the legal orders I created.
While it would be years before I would have the time, resources and confidence to take my fiction writing seriously, I found that my training as an attorney ultimately helped me with my novel.  And while it is true that legal writing provides as much creative flexibility as a mandatory prison sentence, I found that the structure of my training helped shape and inform my writing as a story teller.  Years of drafting contracts that covered every possible contingency with a mix of “heretofore,” and “including, but not limited to” helped me unlock the constant Rubik’s cube-like puzzle that is fiction writing.
When I passed around an early draft of Little Girls—my novel examining the lives and conflict of individuals connected to the Oakland Bay Area sex trade—the question I often received was, “Why this topic?”  My response has always been the same: the topic really chose me.
When I noticed that American cities were having problems with controlling the surge in underage prostitution in the wake of changing attitudes to drug sentencing, I immediately had questions that needed answering.  As a writer I was less concerned with the headlines of the news stories covering this topic—that was just the surface of the individuals involved.  I was more interested in the substance of who these people were.  Like the defendants that would enter the courtroom defined only by the crimes they were alleged to have committed, I knew there was more to each person’s story.
In writing Little Girls, I wanted to avoid a finger-waiving, dogmatic doctrine on the ills of prostitution, but still wanted to provide a narrative that was authentic and accurate.  When I completed an outline covering most of the story, I began interviewing a variety of individuals close to the sex trade.  However, it was after completing research for one of the lead stories, “11-500”—a story that examines the history of an Oakland neighborhood and one family that lives there—that I felt I had something special.  My next step was to weave all of the honest, real and often harsh facts of this life into a narrative that is compelling, entertaining, and that told a complete story (no easy task!)
I hope I have created a work that will be more than a story about prostitutes or prostitution, but more of a narrative that examines the complexities of the human condition; a narrative that goes beyond the headlines and looks further into the lives of characters with vulnerabilities and flaws and ambitions much like our own; characters who have more in common with ourselves than we would have initially believed.  I hope.
Feel free to contact me at the Little Girls website to drop me a line.  Cheers!