Series Sunday: L is for Lawless 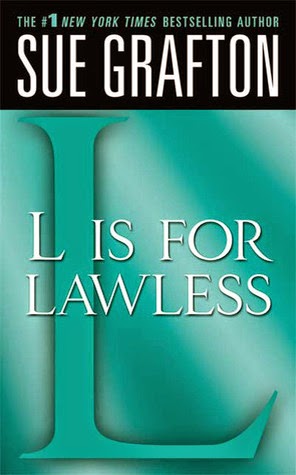 "He thought I couldn't even hold up a seven-pound shotgun. I was insulted. Stereotyping the old." ~ pg. 288

My Series Sunday pick is L is for Lawless, the 12th book in the Kinsey Millhone alphabet series by Sue Grafton. Kinsey is asked to find out why the military has no record of a deceased World War II vet named Johnny Lee. Should be an easy investigation, right? Until his apartment is burglarized, an old friend is beaten up, a pregnant woman with a duffle bag is on the run and a vengeful psychopath pops up. Kinsey is following leads across the country to solve a decades-old mystery that apparently someone would prefer left unsolved.

San Francisco Examiner called this novel one of Kinsey Millhone's "wildest adventures yet." I have to disagree. If I wasn't so invested in this series, I would have stopped reading early on. The mystery of an already deceased person simply did not grab my interest.

Le sigh. I have the same gripe with the meaningless lengthy descriptions. I understand the author chooses to give background info on the main character for readers who start a series in the middle; however, this is the 12th installment. We don't need pages upon pages of background info on Kinsey. Let's just assume readers know who she is.