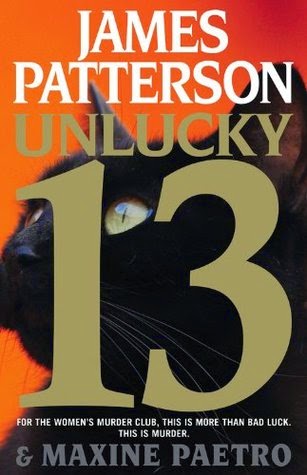 My Series Sunday pick is Unlucky 13, the 13th book in the Women's Murder Club series by James Patterson. San Francisco detective Lindsay Boxer is adjusting to her lovely life of being a new mother with an attentive husband, manageable job and best friends. But her world is threatened when a killer from her past resurfaces. Also someone is planting chemical bombs inside burgers that explode when digested. Lindsay must find the mad scientist(s) who is responsible for the belly bombs before there are more murders.

Mackie Morales once posed as a summer intern with the SFPD and cozied up to Richie, all the while committing murders on the side with her dangerous boyfriend Randolph Fish. She was presumed dead but a photo proves Mackie is very much alive and back for revenge.

Crime reporter Cindy seems to be the only one concerned about Mackie's return. She hails caution to the wind, foolishly throws her pen to the side and tries to find the dangerous woman before Mackie finds them.

Meanwhile, Yuki's honeymoon with Brady has a rough start. She can beat the best of criminals in the courtroom but it is scary when she becomes the victim.

With so many events taking place in this 13th installment of the WMC series, the fourth member of the WMC, Claire, was barely mentioned. I would have preferred she was on vacation than the few cameos she made.

Unlucky 13 was distributed evenly between Yuki's disaster honeymoon, the search for Mackie and the belly bomber. However, one of the story lines seems unfinished while the other two were wrapped up abruptly. There is so much going on that the story does not flow. Where was the suspense? Where was the character development? (Lindsay's new motherhood doesn't count because it is not convincing enough.) What happened to the group of four ladies that pooled resources to work together and solve crimes? The dynamic is gone.

Patterson, this is not "the most thrilling" WMC book yet. Try again.