Basquiat: A Quick Killing in Art 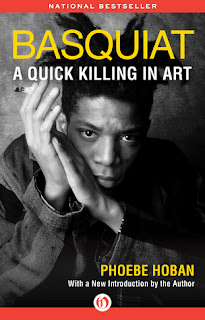 "Basquiat was an omnivorous consumer of source material; he came, he saw, he painted." ~ pg. 347
Even if you lived in a cardboard box, never walked the streets of New York or stepped foot inside of a gallery, you surely heard the name Jean-Michel Basquiat. He was a young international painter mentored by Andy Warhol, known for his meteoric rise, graffiti art and signature words with a copyright symbol and crown. In less than a decade, he took over the art world and became an international artist. Unfortunately, his career ended far too soon as he died at the age of 27 years old from a drug overdose.

Nearly thirty years after his death, Basquiat is still recognized and his story is beyond vividly interesting. Based on hundreds of interviews done between August 1988 and November 1997, Phoebe Hoban goes into detail with Basquiat: A Quick Killing in Art. It begins with his childhood, family life, teenage years and his brief adult life. The novel also covers the 1980s art scene, Basquiat's influence on art culture, the graffiti movement and inner workings of art galleries and dealers.

"For better or worse, Jean-Michel Basquiat has become the world's most famous black artist." ~ pg. 30

Basquiat was so much more than just a young black kid who wrote on buildings and sold art for millions. He is an icon. His black identity shows throughout his signature art. A Quick Killing in Art is the best biography, complete with a photo gallery, for those interested in reading an accurate tale on Basquiat, exploitation, fame, addiction and art dealers during the 1980s. This novel left me wondering, had Basquiat not died young and lost his life to drugs, what more he might have contributed to the art and hip hop culture. It is impossible to ignore the international legend that is Jean-Michel Basquiat.

Posted by Literary Marie at 6:34 PM