The Sudden Appearance of Hope 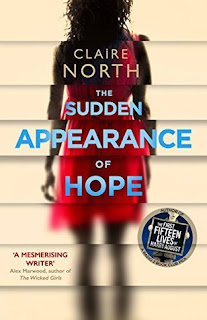 "First impressions matter, when they are all you have to live by." ~ 5%

Every intended meeting with Hope Arden is as if she suddenly appeared for the very first time. You could have met her a thousand times before but forgot. It started when she was sixteen years old. Her mom setting the dinner table for three instead of four. Her dad not driving her to school. A friend who sees her as a stranger. A classmate who thinks she is the new girl. A cop who arrested her for a crime but can't remember why. So little of Hope Arden is left behind when memories are stripped away. Sure it may seem hurtful but Hope Arden takes advantage of her condition by living a dangerous life; she steals to live.

PERFECTION is a life-coaching app designed to make a better you. Once you download and give it access to all your data, it gives daily reminders and suggestions to make your life better. Where to shop, what to wear, where and what to eat, how much to spend, etc. Before long, it is addictive and heavily relied upon by tons of people.

A woman becomes consumed with the app PERFECTION to the point where she falls into a depression and commits suicide because she just isn't perfect enough. Hope Arden met this woman repeatedly but, of course, was forgotten. Hope takes it upon herself to steal jewels from the ones responsible for PERFECTION. Her personal vendetta gets entangled with the agenda of other dangerous users in the darknet.

"A gap between knowing a thing, and comprehending it. Between perception and belief." ~ 65%

Claire North, where in the heck did you get this idea from? It is a story line I never heard of or read before. Or did I forget? Hmmm... either way, The Sudden Appearance of Hope has an original premise with a subplot that could very well happen in real life. Apps run the world and Claire North certainly shows through her third novel how dangerous that can be.

Though too lengthy at parts, The Sudden Appearance of Hope is a recommended read for those looking for something original, dark and modern.

Posted by Literary Marie at 3:14 PM