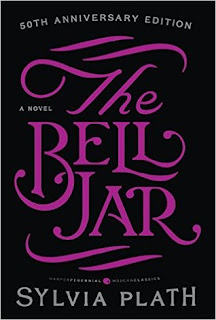 "What I've done is to throw together events from my own life, fictionalizing to add color--it's a pot boiler really, but I think it will show how isolated a person feels when he is suffering a breakdown...I've tried to picture my world and the people in it as seen through the distorting lens of a bell jar." ~ pg. 254

The above quote from the author herself is the best description of The Bell Jar. It is the semi-autobiographical novel of Sylvia Plath which details her dream to become a writer and struggle with depression as her personal life falls apart and society refuses to take women's aspirations seriously. To Plath and the main fictional character, Esther Greenwood, the world was a bad dream.

Even though The Bell Jar was written more than 50 years ago, it is still relevant today. The questions of how to sort out your life, how to deal with men and sex, how to be true to your successful self and live day-to-day are all still the same today. The anxieties of life have not changed. Now I see why Plath was viewed by critics as a contemporary and feminist. It is unfortunate that her suicide in 1963 brought instant fame; Plath was already a literary star.

As I sat down to type my review of The Bell Jar, I realized it is damn near impossible. How do I review such a classic? Both the novel and the author's reputation is already established regardless of what I have to say. All I can offer is my recommendation for those who are unfamiliar with Sylvia Plath. (Re)Read this classic! Research the author and impact of her brief career as a poet, novelist and short story writer. See for yourself why The Bell Jar is the feminine companion to Salinger's Catcher in the Rye. See why this novel remains in Chickadee's favorites of all time. It is a great choice to read during National Mental Illness Awareness Month.