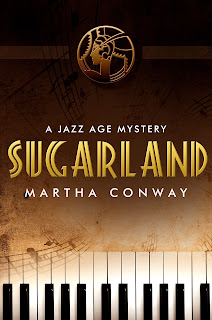 Welcome to Literary Marie's Precision Revision! Thanks for visiting the last blog tour stop for Martha Conway's new jazz age mystery, Sugarland (available as of May 12, 2016). I love a good mystery so very excited about sharing my review and an excerpt. Get comfy and enjoy the content below.

Synopsis
In 1921, young jazz pianist Eve Riser witnesses the accidental killing of a bootlegger. To cover up the crime, she agrees to deliver money and a letter to a man named Rudy Hardy in Chicago. But when Eve gets to Chicago she discovers that her stepsister Chickie, a popular nightclub singer, is pregnant by a man she won’t name. That night Rudy Hardy is killed before Eve’s eyes in a brutal drive-by shooting, and Chickie disappears.


Eve needs to find Chickie, but she can’t do it alone. Lena Hardy, Rudy’s sister, wants to learn the truth behind her brother’s murder, but she needs Eve’s connections. Together they navigate the back alleys and speakeasies of 1920s Chicago, encountering petty thugs, charismatic bandleaders, and a mysterious nightclub owner called the Walnut who seems to be the key to it all. As they fight racial barriers trying to discover the truth, Eve and Lena unravel a twisted tale of secret shipments and gangster rivalry.

My Review
If I had the opportunity to go back to an era, it would be the 1920s. The fashion, the jazz, the nightlife and the beginnings of women empowerment would be right up my alley. So the setting of Sugarland was perfect for me. Author Martha Conway wrote such descriptive backgrounds that it was like watching a movie. She captured the essence of the Roaring 20s, Prohibition and Jazz Age. Racism and relationships between races was also a theme in the novel and well portrayed. It was interesting to read how black and white musicians were treated during the Jazz Age as well as refreshing to watch a friendship build between two women from different backgrounds. The characters were well-developed with their own distinct personalities shown through both actions and dialogue. And the mystery wasn't so easy to solve!

Sugarland is a smooth read recommended for a breezy spring/summer evening on your patio with your favorite drink (or homemade hooch) and American jazz (Bessie Smith or Billie Holiday) playing in the background. You will get lost in the suspense fiction within the first couple chapters. In fact, you can start with the excerpt below then purchase Sugarland on Amazon. Trust me—you'll want to continue reading this story.

At two in the morning the trains were stopped for the night, and the old wooden depot, manned only during the day now that the Great War had ended, was deserted.
Eve could see her breath in the cold January air as Gavin Johnson helped her up the last step of the empty train car. Then he jumped up himself. He moved closer and she smelled whiskey and something musky he’d splashed on his face. He pressed her against the rail and began to kiss her with lips cold at first but getting warmer. That was all right.
She turned her head and kissed him back, a feeling of steam moving up through her body. The night was so still it was like a creature holding its breath. She pulled away for a moment. “How’d you get a key to the train car?”
Gavin just laughed. “Let me put out the light.” He opened his lantern’s tiny glass door to blow out the flame, and in the darkness Eve followed him into the empty car.
Her blood was still warm from the corn whiskey she had drunk with the boys after the show, and she felt a little lightheaded. Here she was with a handsome man late at night, alone, her heart beating hard. Before her the rows of worn velvet seats were like people turning their backs. For some reason this excited her more.
“Nice at night, dontcha think?” Gavin asked, taking her hand. With his other hand he touched the soft fold of her dress at the collar. Then he began to unbutton her coat. They were in the Entertainers’ car, the special train car they all traveled by and even slept in if there weren’t any colored hotels in town. Jimmy Blakeley and His Stoptime Syncopaters, they were called, with Gavin Johnson on tenor sax and Eve Riser on piano. Everyone in the band was young and excited, and Eve felt young and excited just being around them. But sometimes it got lonely going from place to place without resting.
From the window Eve could see the empty depot house. Gavin touched the side of her face and she closed her eyes.
Oh she should know better all right. But she was feeling so good, she had played so well that night, really found her way into the music. Also that afternoon she had started a new song—“Sea Change,” she would call it. The first four bars were a gift, just appearing in her mind as she walked back to the hotel from the drugstore, and they still looked good even after she’d written them down.
It was hardly warmer inside the train than out and she pressed against him too now, wanting to feel every inch. Gavin spread his overcoat on the floor and Eve let him guide her down onto the aisle, a hard space meant for feet. After a while his kisses became firmer and deeper like now they had really started, they were really going somewhere now.
She felt his hands behind her neck, fumbling with the buttons of her new dress.
“Gavin,” Eve said.
“Shh, angel girl. I got us all covered.”
She let him undo the buttons. She’d been on the circuit six months now. Six months of playing different pianos all in need of tuning, of fending for herself, of shooing off managers who said come on back to my office and I’ll show you something I know you’ll like. Some of the boys in the band called Eve beautiful but she didn’t know about that. What she cared most about was her music. The horn players liked to start off with notes so strong and high you thought there was nowhere else to go, challenging Eve to follow. She always did. She thought of them as brothers, the teasing variety. But then Gavin came in halfway through their tour, a fine-looking man with deep brown eyes and a complexion her grandmother would call Georgia brown. At first Eve thought he was just another alligator with his little straw boater and his silk tie and his fine boutonniere pin from one of his daddy’s social clubs, but it turned out he was there to play second sax. He called her angel girl and brought her coffee in the mornings. She was tired of being lonely. She liked his sloping smile.
Gavin got her last button unbuttoned. His eyes dark liquid drops in dark hollows. He pulled her dress down to her shoulders and kissed her collarbone again.
“Beautiful,” he said.
“I should say,” said a deep voice behind them. 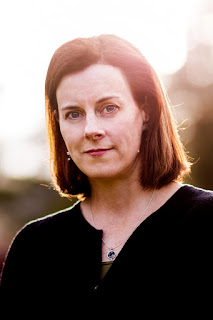 About the Author
Martha Conway is the author of Sugarland: A Jazz Age Mystery [Noontime Books], available via Amazon as of May 12, 2016. Conway’s first novel was nominated for an Edgar Award, and her second novel, Thieving Forest, won the 2014 North American Book Award for Best Historical Fiction. Her short fiction has been published in The Iowa Review, The Carolina Quarterly Review, The Quarterly, The Massachusetts Review, Folio, and other journals. She teaches creative writing for Stanford University’s Continuing Studies Program and UC Berkeley Extension, and is a recipient of a California Arts Council Fellowship for Creative Writing. Born in Cleveland, Ohio, she is one of seven sisters. She currently lives in San Francisco.

Disclaimer: A special thanks to the publisher Noontime Books and SMITH Publicity for the ARC. This book was received directly from the publisher for review and tour purposes only. In no way does it influence my review. The opinions I have expressed are honestly my own and would be the same if I spent my hard-earned coins.