All the Pieces Matter: The Inside Story of THE WIRE 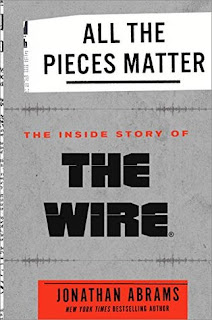 "THE WIRE keeps getting better, and to my mind it has made the final jump from great TV to classic TV." ~ pg. 189

Who did the character research? Is there a real Omar? How did Idris Elba feel to have Stringer Bell killed off the show? Was Snoop a killer in real life? Was it awkward on set to have kids around not even old enough to vote? Which universities use the show to teach film theory or criminal justice? Was THE WIRE the golden or bastard child of HBO?

As a huge fan of THE WIRE, I claim to know almost everything there is to know about the series, the set, the background and the real-life inspirations behind characters and season plots. I can talk about it in depth and answer most of the questions above. But after reading All the Pieces Matter, I realized I barely knew the real scoop. I learned so much more! There has been a great deal of analysis and critique of THE WIRE since its final episode aired in 2008. But nothing like All the Pieces Matter that gives a behind-the-scenes take on everything from how it was created to its powerful end.

"You don't write for anybody but the story, for yourself and for your idea of what the story is." ~ pg. 177

At almost 300 pages of strictly dialogue, this is not the type of book you can curl up with and read in a couple sittings. After all, it is non-fiction. But thanks to the author for formatting it as an oral history rather than long ass paragraphs. Instead it is like overhearing a conversation among friends simply reminiscing.

"Baltimore and THE WIRE would become eternally linked in an increasingly layered relationship." ~ pg. 77

I suggest reading it at a slower pace to digest what the cast, directors, writers and crew are saying about their experience working on THE WIRE. Most importantly, All the Pieces Matter dives into what other books about THE WIRE barely touch on—the show's main character: City of Baltimore. One thing is for sure: fans will appreciate this inside story and understand more of the best television series to ever air. This is the uncut truth...16 years after its first episode aired.

Happy Early Pub Day, Jonathan Abrams! All the Pieces Matter: The Inside Story of THE WIRE will be available Tuesday, February 18, 2018. Hard to believe it has been almost 16 years since the first episode premiered on 06.02.2002  Let this book take you down memory lane!

Title: All the Pieces Matter: The Inside Story of THE WIRE
Author: Jonathan Abrams
Published: February 2018
Pages: 280
Edition: Galley
Rating: 🖤 🖤 🖤 🖤