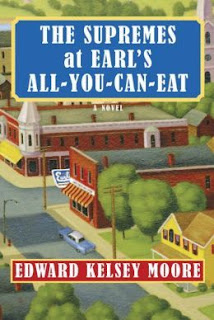 "Not knowing any better, I listened to what I was being told about myself and grew up convinced I was a little brown warrior." ~ 4%

My Series Sunday pick is The Supremes at Earl's All-You-Can-Eat, the first book in The Supremes series by Edward Kelsey Moore. Don't let the old school title or homely cover fool you. This is not a book about the Motown divas, Supremes. It is not about a small town diner. Dubbed the "Supremes" by high school friends in the summer of 1967, three black women have leaned on each other for four decades through best and worst times. But this year is a true test of their friendship and faith. Clarice is humiliated by a cheating husband. Barbara Jean is rocked by a youthful love affair. And Odette engages in the most terrifying battle of her life.

"We overlooked each other's flaws and treated each other well, even when we didn't deserve it." ~  12%

One thing is certain in their lives. Every Sunday, The Supremes are guaranteed to meet at Earl's All-You-Can-Eat, the first black-owned business in downtown Plainview opened in the mid-1950s, for delicious food, juicy gossip, realistic banter and sometimes tears. These are funny, strong women with real shit happening. They are sassy with a bite of truth serum in their dialogue.
"We found out about Mama seeing ghosts at a Thanksgiving supper back in the 1970s." ~ 2%

Ghosts are mentioned very early on in the book. This was almost a deterrent for me. Something about ghosts and spirits doesn't bode well in my mind so I block them. I know they are real. I know they speak to some people. But if I think too long about ghosts, my head will hurt. However, I was not too bothered by the Mama ghost and Mrs. Eleanor Roosevelt ghost—who was good at picking out who was about to die. I don't think this story could've been told as well without their presence.

Book Clubs: you have to add this to your monthly selection. It will make for serious yet funny discussions. You are guaranteed to recognize yourself or a close friend in the lives of the Supremes.

Thanks to my Chickadee for recommending this feel-good-down-home novel!