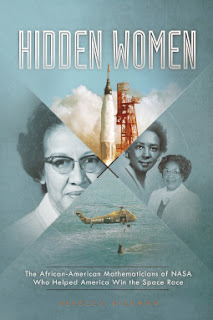 "There were no parades for Katherine Johnson, Dorothy Vaughan, Miriam Mann, Mary Jackson, Annie Easley, Christine Darden, or any of the other human computers." ~ pg. 74

It would be impossible to go into space without mathematicians. Like Katherine Johnson in 1962, we [black women] are used to being essential but unseen. In 1958, Miriam Mann became NASA's first black female engineer. Before that in 1949, Dorothy Vaughn became the first black manager there. These women literally made it possible for U.S. rockets and astronauts to go into space. This is no small feat. Add in the daily struggles of being a colored woman in a segregated world and the resistance experienced. The amazing result and work of these women is an important part of history that I am glad is being told.

"It was another thing entirely to ask for a black woman to do the job." ~ pg. 7

I recommend Hidden Women for young readers. This is an easy-to-follow history story perfect for Black History Month. It includes a timeline of events, glossary, further reading list, critical thinking questions and sources. There are pictures of Apollo 1, Centaur, astronauts and of course, the women. For my bookhearts with young children or in education, I highly suggest this book. Not only does it spotlight the three (3) women we have grown to appreciate but other less-known, second generation of black women who worked behind-the-scenes at NASA. They used their expertise to help the United States. We can all excel in math and science. We can also literally reach for the moon. Show young people that we are crucial to success.