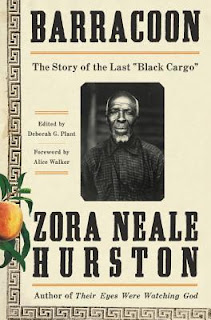 In late 1927, Zora Neale Hurston conducted a series of interviews with the last known surviving African of the last American slaver. Oluale Kossola, also called Cudjo Lewis, was 86 years old at the time. He recalled memories of his childhood in Takkoi, the attack of female warriors, seeing jawbones snatched and decapitated heads of his family and townspeople. He was held at the barracoon, enslaved in America, then lived through the Civil War and Jim Crow to tell about it. He trusted and shared his life story with Zora Neale Hurston over the span of three months.

Look at the book cover above and let this fact sink in. Of all the millions of people captured and transported from Africa to America, Cudjo Lewis was the only man left. His illegal journey from Africa to Alabama, United States was aboard the fastest slave ship called Clotilda under the guise of shipping red palm oil. It would turn out to be the last voyage. The thought alone makes me shiver.

"How does one sleep with such memories beneath the pillow?" ~ pg. 16

Barracoon has elements of folklore, traditional storytelling and historical data. But it is told in a way that is not up for interpretation. It is Cudjo Lewis' life story as told by himself. Thanks to the dialogue written as Cudjo pronounced it, I can picture Zora Neale Hurston eating sweet Georgia peaches and ice cold watermelon* as Cudjo gets lost in thought and shares details from a cargo's point of view. Most times it was hard to understand but about halfway through, I picked up on certain words (de=the; Afficka=Africa; doan=don't; astee=ask). *Please note this is not a stereotype that I threw in my review. They really did commune over watermelon under the shade of his China-berry tree.

I have to be careful reading books like this. The ways of our good ole' country and its treatment of blacks usually rile me up. But surprisingly, it was not the content that made me angry. Barracoon was completed back in 1931. How this story of the last "black cargo" took so long to find a taker and be published is beyond me. It's been nearly a century! Perhaps because there is no sugar-coating that Africans were not only victims, but participants, of the slave trade. Yeah, go ahead and swallow that pill. This nugget of truth is just one of many that makes Barracoon a hard read. Alice Walker says, "We are being shown the wound."

At the risk of sounding like a school book report, I will now end this review with a recommendation. Bookhearts drawn to black history, nonfiction and a good word from novelist/folklorist/anthropologist, Zora Neale Hurston, will appreciate this new release.